My room is an awful mess and someone NEEDS to come clean it. Free liquor to the first helper.

It’s my first video so don’t be too harsh 🙂 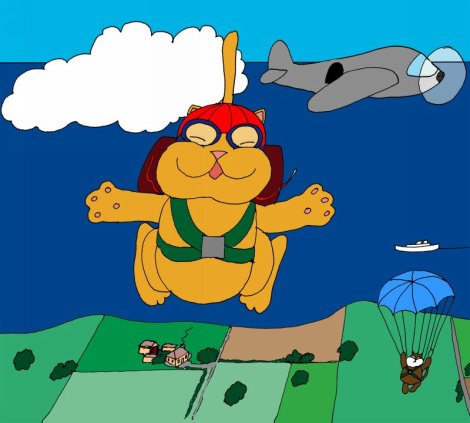 I heard this story in a kayaking documentary a while back and found this article about the story:

In 1950’s The World Health Organization (WHO) backed the 1st ever team of more than 14,000 parachuting cats into Borneo.

It was early in the 1950’s, the Dayak people of Borneo tragically endured an outbreak of malaria, dispersed by mosquitoes. The World Health Organization (WHO), without considering all the effects, generously sprayed the region with DDT to obliterate the mosquitoes.

The mosquitoes perished, malaria diminished and the folks of Borneo were pleased.

And then roofs began to break down and the folks of Borneo were sorrowful. It appeared that a parasitical wasp had antecedently been holding back a thatch-eating caterpillar in check and the DDT wiped out the wasps, meaning the caterpillars were having an absolute field day.

Tragically, assorted poisoned insects were consumed by geckos, which were eaten up by cats and more cats expired. The inhabititants of Borneo missed their cats greatly and called for WHO to help mend the damage it caused. WHO spoke to many of their feline experts who advised that fourteen thousand cats should skydive into Borneo, in order to assist the grief-stricken occupants, who yearned to get their feline companionship once again. WHO also believed it could assist with the monolithic eruption of rats, which were propagating typhus fever and plague.

WHO started Operation Cat Drop and the cats began jumping. The citizenry of Borneo acquired fresh feline acquaintances, the rat population slumped and the poeple of Borneo were euphoric once again.

“This is a graphic illustration of the interconnectedness of life, and of the fact that the root of problems often stems from their purported solutions.”

We’d wish to pronounce a special thanks to each and every courageous cat who jumped into Borneo on that important day.

The final word on everything. Fact.